Ultimate Guide on Bhutan Trekking Routes Prices and All

While Bhutan may not be the trekking capital of the Himalayas that Nepal has become, the years of isolationism and the unique policy of environmental protection and ecological tourism means that the trekking routes in the Kingdom of the Thunder Dragon are some of the best in the world. Bhutan is wholly unique in that its landscape is almost untouched across around 70 percent of the country, and will remain so for as long as the policy of the kingdom is to retain its natural landscapes for future generations.

From the stunning treks of the Bumthang region to the immense Snowman Trek and the trails that lead to the highest of Bhutan’s Himalayan peaks, Bhutan has a wide range of treks to suit all levels of experience, as well as all weathers and seasons. And while there may be times when Nepal is mostly closed for trekking across the country, Bhutan will still have a trek that you can take, no matter what time of year it is. Just follow our travel expert’s guide and learn the some of the key information you need for trekking in Bhutan.

Bhutan Trekking Seasons You Should Know

Bhutan has two main trekking seasons, the spring and the autumn. The spring season runs from early March to the end of May, and is the cooler of the two seasons in the kingdom. In the higher mountain areas of the Himalayas, the weather is still quite cold, reaching around 2 degrees in March, and getting warmer through the spring to May, where it can get as high as 15-18 degrees. There is still some likelihood of snow in the mountains in March, though it normally melts by the end of the month, leaving April as a warmer and better month for trekking, right through to the end of May, before the rainy season starts. 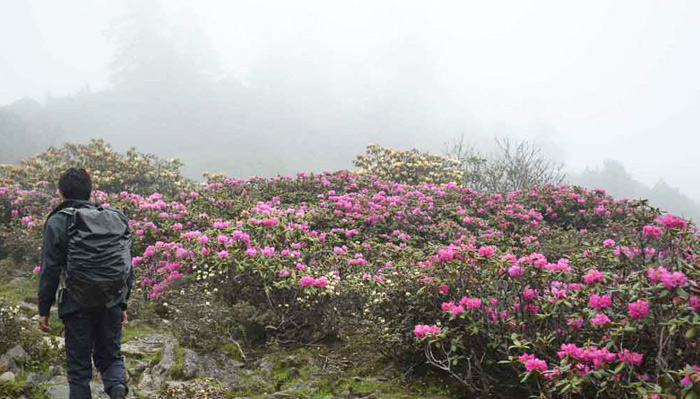 Travelers can appreciate the blooming azaleas of Bhutan in spring.

The autumn season runs from late September to around the middle of December, as long as the winter has not started early. The early part of the autumn, in late September, can still be a little damp, as it is the tail end of the monsoon season, though the land is normally starting to dry up by then, and the majority of the monsoon rains are spent. October and November are relatively warm months, compared to the early spring, and daytime temperatures range from 18-22 degrees in the area around Thimphu to the high twenties and even up to 30 degrees in the central and southern areas of the country.

How to Budget the Trekking Cost in Bhutan

Tours in Bhutan are subject to the government’s policy of eco-tourism, and all tours have a Minimum Daily Fee that ranges from 200 dollars per day in the low season to 250 dollars per day in the high season. This amount covers all of your requirements, from transport within the kingdom and the cost of your private guide and vehicle to the hotel accommodation and all of your meals. The entire tour is covered with all the normal expenses, and there is no need to fork out for much while you are there outside your inclusive items.

For all tours in Bhutan, the Minimum Daily Fee covers the tour expenses as well, and unless you are thinking of upgrading your accommodation to something higher than 3-star, or are intending to eat at high-end restaurants and buy a lot of alcohol and gifts for people back home, then budgeting the trip is pretty easy. Click here to know How Much Does It Usually Cost to Visit Bhutan? and How to Plan Your Bhutan Travel Cost 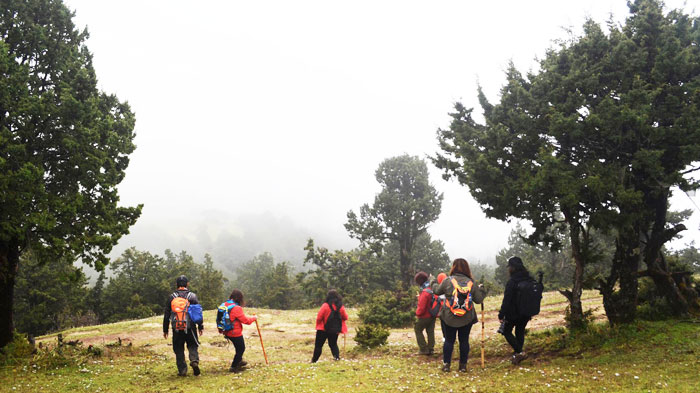 Join in a small Bhutan trekking group will help you cut down the hiking costs.

However, trekking is a little different from normal tours. The longer the trek, the more expensive the cost, since the amount is based on a daily amount. And there is also a surcharge for trekking, which goes down with more people in the party. A single trekker will pay an extra 50 dollars per night when trekking alone, while groups of three or more pay only ten dollars per day each. The only real expense outside the Minimum Daily Fee is the tip for the guide, driver, and trekking guide if different (though usually for trekking tours it is the same guide throughout). While this is not a requirement, it is “expected” to tip the driver and guide for a good and well-managed tour.

The Top Trekking Routes in Bhutan

A six-day trek that offers the best introduction to trekking in Bhutan, the Druk Path Trek starts near Paro and takes you across the mountains to the capital at Thimphu. The highest point of the trek is the high pass over the mountains, at 4,200 meters, which takes you up more than 2,000 meters higher than the valleys of both cities. A trek that can be done throughout most of the year, with the exception of July and August, the trail takes you close enough to Bhutan’s highest peak, Mount Gangkar Puensum, to get a great view of the summit of the mountain, which sits at 7,570 meters above sea level. The highest unclimbed mountain in the world, it is unlikely to be scaled as Bhutan has forbidden climbing of mountains above 6,000 meters.

An 12-day Jhomolhari Trek that is one of the most popular in Bhutan, this moderately challenging trek crosses the two high passes, the Bhonte La Pass at 4,890 meters and the Tak-hung La Pass at 4,520 meters. The best trek for viewing the 7,326-meter summit of Mount Jhomolhari, which straddles the border between Bhutan and Tibet, it is best done in the late spring and autumn seasons. You should prepare for high elevations that may cause altitude sickness, so a steady acclimatizing climb is usually made to get to the high passes. One of the best parts of the trek are the small villages and the local culture, and the ideal timing is during the Jhomolhari Mountain Festival which is celebrated in the local area every year. 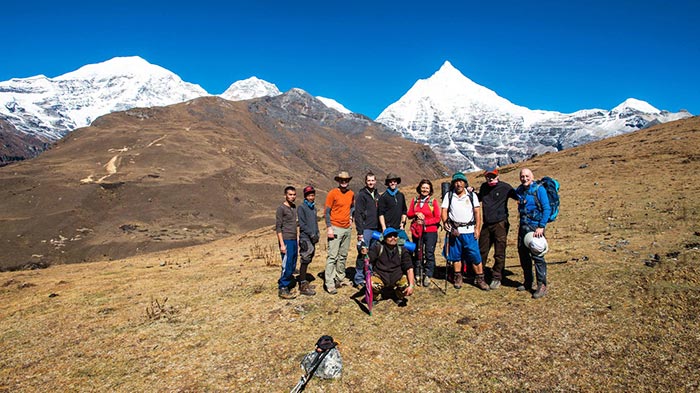 A Jhomolhari Trek can offer you the opportunity to experience the unique culture and stunning landscape in Bhutan.

Rated as a very strenuous trek, the trail from Gunetshawa to Gasa Tsachu is a twelve-day trek that offers a wide variety of trekking scenery, from beautiful farmland valleys to alpine pastures, primeval forests, and high passes. The highest pass of the many that you will cross on this long trek is the Shinje La Pass, at 4,900 meters, which lies between the Takin-occupied valley of Tasharijathang, with its unique Himalayan Takin sanctuary, and the glacial valley of the Kango Chhu, near Limithang. One of the best treks in Bhutan for spotting many of the rare creatures that inhabit the kingdom, it is best done in spring or autumn, as it gets close to the high peaks of Jhomolhari and Jichu Drake.

Snowman Trek - The Ultimate and Most Challenging Trek in Bhutan

The ultimate in Bhutanese trekking, the Snowman trek is a 22-25-day trek that is possibly the most difficult trek in the world. Traversing the Himalayas alongside the border between Bhutan and Tibet, the trek starts in Paro and ends in the village of Lunana in northern Bhutan, crossing a total of 11 passes along the way. The highest pass, at 5,230 meters, is the Gangla Karchung Pass, with another four lying at altitudes above 5,000 meters. The main challenge of the trek is the isolation, as it passes through areas of Bhutan that are unpopulated. The best time for the trek is in October, when the weather is at its most optimal, and you need to be well prepared and physically fit for this epic adventure.

A shorter trek than most of the other popular treks, this explorative trek of the remote area of eastern Bhutan and the Sakteng Wildlife Sanctuary is a good trek for first-time trekkers in Bhutan, rated easy to moderate, and averages around six days of trekking. Starting in the village of Chaling near Trashigang, the trek takes you through some of the region’s most stunning scenery, with plenty of juniper, rhododendron, and larch forests. The highest point of the trek is above Merak Village, at the Nyakchung La Pass, which sits at an elevation of around 4,070 meters. An ideal place for a good view of the vista of the Himalayas to the north, the pass is marked by a mani wall and thousands of prayer flags. The trek heads through the famous Sakteng Wildlife Sanctuary, known locally as the Migoi National Park, which was set up to look after the Migoi, or yetis, that are believed to inhabit this area of the kingdom. 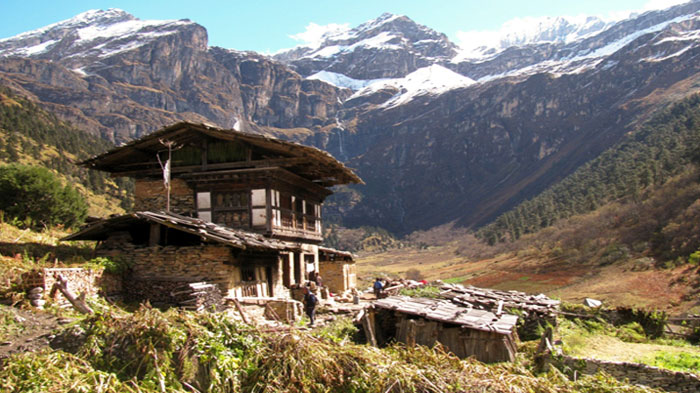 The beautiful natural landscape along the Merak-Sakteng Trek.

Other Off-the-beaten Treks in Bhutan

A moderate-rated Dagala Thousand Lakes Trek for people with a good standard of physical fitness, but without the need to have experience in alpine trekking, the Dagala Thousand Lakes trek is one of the most picturesque treks in Bhutan, and maybe even the world. Passing by many high-altitude lakes in alpine pastures and meadows, it is also an ideal trek for bird watchers and those who admire the stunning flowers of the Himalayas. A six-day trek that presents you with excellent views of the Himalayan peaks of Mount Everest, Kanchenjunga, Jhomolhari, Jichu Drake, and several others, it is best done in late spring or mid-autumn for the best weather for the views. The highest point of the trek is at the top of the saddle of the western side of Mount Dala Tsho, at an altitude of around 4,720 meters.

Famous for its stunning hot springs, this 8-day trek is mostly held inside the Wangchuck Centennial Park, which has seven hot springs in the area. The trekking trail leads you through some of the area’s primeval juniper, rhododendron, cypress, and spruce forests, and is a great trek for spotting snow leopards, Himalayan Takin, blue sheep, and the Tibetan wolf. The Duer Hot Springs trek is a strenuous hike along rough terrain in an area that is known to be volcanic, hence the hot springs, and is mainly for experienced alpine trekkers with a high level of physical fitness. The hot springs can also be enjoyed along the route, to ease those aching muscles.

Bhutan has a trek for all levels of experience and lengths of tour, and no matter what your standard, you will find something that is ideally suited for you, from the simple treks that take you along the rolling hills of central Bhutan to the epic adventures of Duer and the Snowman, which are best for very fit and experienced trekkers. While trekking in Bhutan may not be the cheapest place to go trekking, it is probably the most spectacular, and the scenery and landscapes of the Bhutanese Himalayas are without comparison.