9-day Beijing and Lhasa Tour via Qinghai-Tibet Railway juxtaposes highlights of Beijing tour with must-see Tibetan Buddhism culture tour in Lhasa. Tourists will get amazed at how harmonious the international city Beijing coexists with its historic past.
Meanwhile the unparalleled ride on world’s highest Qinghai-Tibet Railway would be a mind-blowing experience and it can effectively minimize the symptoms of altitude sickness, given the gradual ascent. In addition, during the high season of Tibet tour (approximately in summer holiday and one week before and after Spring Festival in winter), flying from Beijing to Xining, and taking train to Lhasa is the most viable way to solve the problem of shortage of Beijing-Lhasa air ticket.

Free Time to Tour Hutong - Nanluoguxiang and do Shopping 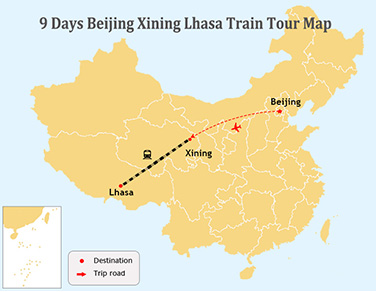 Transfer to your reserved hotel after arriving in Beijing airport. The rest of the day is at leisure.

After breakfast, your guide will lead you to visit the majestic Mutianyu Great Wall. You will be taken on a group tour to the Great Wall, the most famous symbol of China and one of the world’s most remarkable architectural wonders. This section was first built during the Ming Dynasty (1368-1644 AD).

Today, you will head to visit the magnificent Forbidden City which used to be the imperial palace of the Ming and Qing dynasties with a history of around 600 years. Then, you will move to the Imperial Ancestral Temple (also Taimiao of Beijing). Lying to the east of the imperial palace, the Forbidden City, the Imperial Ancestral Temple was a place where Chinese emperors stored their ancestors' tablets and worshipped them during festivals and ceremonies.

After that, you will visit Beihai Park. It is one of the oldest, largest and best-preserved ancient imperial gardens in China. With over 1,000 years' history, the park is not only a classic combination of the grandiosity of the northern gardens and the refinement of the southern gardens in China, but also a perfect integration of magnificent imperial palaces and solemn religious constructions.

Day 4: Free Time to Tour Hutong - Nanluoguxiang and do Shopping

Hutong, which refers to traditional courtyard residence in narrow alleys in Beijing, is a great place where international tourists can learn the folk culture and old quarters of Beijing city.In the morning, tourists can are recommended to explore Nanluoguxiang yourself, one of the most famous Hutongs in Beijing.

With bustling main street, you will find a variety of cafes, kiosks selling different kinds of food and beverages and souvenir shops. A great way to tour Hutong is to enjoy the ride on a traditional rickshaw and rickshaw riders, most of whom can speak basic English, will take you to cover all the historical significance.

In the afternoon, tourists are free to do some shopping in Beijing and get prepared for the flight to Xining in the tomorrow morning.

Day 5: Fly from Beijing to Xining and Get Transferred to Lhasa via Qinghai-Tibet Railway

In the morning, tourists will take flights from Beijing to Xining and the fly takes around 3 hours. Later, after you arrive in Xining, we will board Xining-Lhasa train, which is the highlight and real beginning of Qinghai-Tibet Railway to Lhasa, Tibet.
In the train, tourists will enjoy the ride on the world’s highest train. You about to stunning vista of Gobi Desert in Golmud, Yuzhu Peak (6178m) and incredible Tuotuo River, and pass the Tanggula station (5072m), which is the highest part of Qinghai-Tibet Railway, boundless grassland on the Qinghai-Tibet plateau, etc.

Day 6: Arrive in Lhasa and Acclimate to the High Elevation of Lhasa (3658m)

When you arrive in Lhasa either by train, your guide will greet you and take you to your hotel. Tourists may view the Yarlung Tsangpo River/ Bhamaputra river (the Longest and largest river in Tibet) and Lhasa river on their way to Lhasa.

After arriving in Lhasa, you can take a rest and get acclimatized to high altitude. If you feel to go out, then you can go to the Potala Square, where you will enjoy the fountain with different colors and get amazing photos of the Potala and around.

Visit two important monasteries in Lhasa, the Drepung and the Sera.

Drepung monastery is situated at the foothill of a mountain and was founded by Jamyang Choeje in 1416. It was once home to 10000 monks and Ganden podrang in Drepung is famous as it was the government centre and later moved to the famous Potala palace during the fifth dalai lama.

After having lunch, visit the Sera Monastery, which was founded in 1419 by Tsongkapa’s disciple Jamchen Choeje. The most attractive is its Buddhist Scriptures debating held in the courtyard mostly around 3:00 – 5:00 in the afternoon.

The guide will transfer you to the airport or train station and help you get on board.

If you have limited time for travel yet still want to tour Beijing and Lhasa in the most effective way, this 9-day tour is highly recommended to you esp. when your tour overlaps with high season of Tibet tour and the demand of Beijing-Lhasa air ticket far exceeds the supply. The distinct culture and history in Beijing and Tibet and second-to-none ride on Qinghai-Tibet Railway make sense to most of international tourists.